Anyone who meets me will find that I am a huge history buff and nothing excites me more than working and living in the historical Dowtown Kingman area and selling homes in this area. My fiance and I live in a home that was built in 1928 and is completely made of stone. It is a home that I walked by going to school every morning and as a kid never dreamed I would live in such a magnificent historical and architectual stunning masterpiece.

Downtown Kingman is located in a natural basin, surrounded by basaltic hills, and was not established as a mining camp, but was a railroad hub. In 1880 Lewis Kingman surveyed along the Atlantic and Pacific right of way between Needles and Albuquerque. By 1883 the track was completed. The first reference of Kingman itself was from the newspaper the Alta Arizona, a newspaper published in Mineral Park near modern day Chloride. It issue of June 10, 1882 states, "There is a new town on the tapis at or near Beale Springs." In 1882, the Alta Arizona refers to the sampling works at Kingman, also saying that Middleton is to be hereafter named Kingman, where in November of 1882 a rooming house, store and other buildings were going up.

By 1888 most of the original townsite lots had been sold. On the north side of the Santa Fe line, the business district grew and prospered and on the south side homes dominated the landscape. Today when we do title searches on property we can go all the way back to the railroad usually owning the land and before that the US and finally all the way back to Spain owning the land here.

Red Lake Ventures, Farming in Kingman, a Completely New Idea for Our Area. 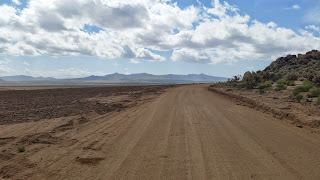 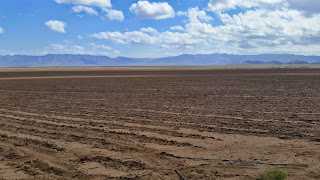 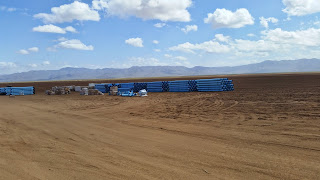 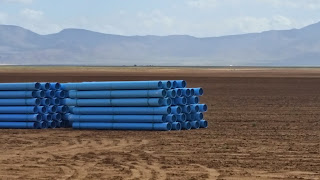 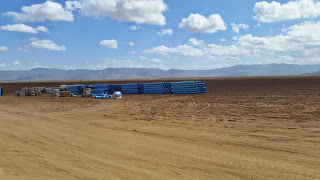 Above are some of the photos I took of the new Red Lake Venture site about 20 miles north of Kingman. Recently there have been a lot of dust complaints due to the fact that the site had three square miles of dirt scraped and the natural vegetation (weeds) no longer held it down. This is an area where there is little vegetation, not much of a habitat for any kind of animals, or anything really to speak of.  However it is a push forward to something our town has never had. Farming. This land has been overgrazed for years by the local ranchers with their cows. However Red Lake Ventures is a hedge fund from back east that is actively purchasing land in the area to use for growing cotton. Right now the photos in this blog are of water systems they are putting in that will use drip irrigation to water the cotton fields.
There is a lot of controversy surrounding this as there are studies on the amount of water available but it doesn't change the fact that we are in the desert and get 11 inches of rain per year on average. The water usage studies already say that we are using more than what is being replenished.
I think with the extended drought in California we will see more and more farming activity come this way. Right now we do sell to final end users of the farms, it is just a matter of time before speculation buying comes into effect with more activity that will then again push land prices up.