The map attached is just an update of what will be happening here. The city is going to put in an underpass at Cherokee Street, this is Prospector on the other side of the freeway where your land is. They have money in the general fund that can pay for this now. This will allow access for parents that live on the south side to take their kids to school easier on the North side of the Freeway. 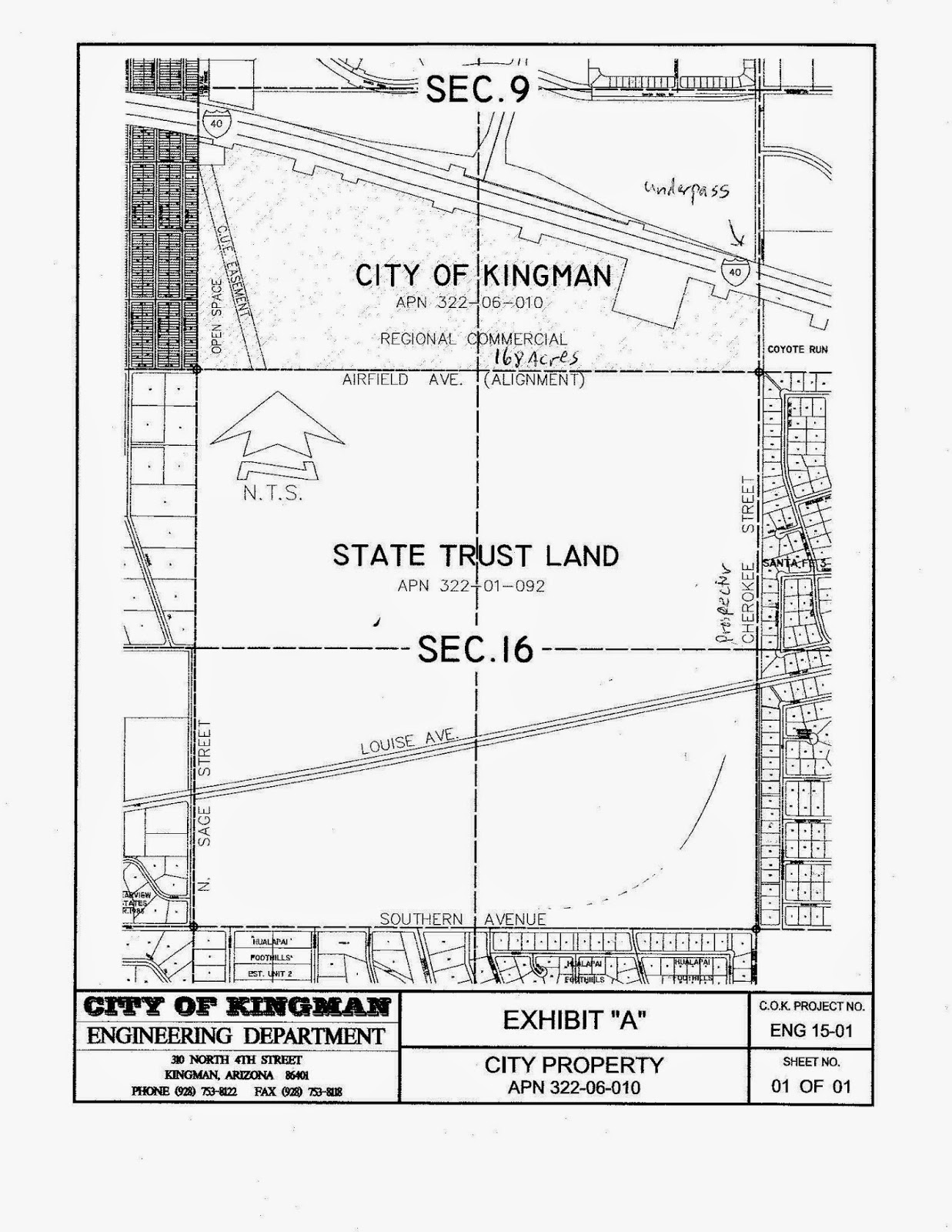 The city is also working hard to rezone their 168 acres for Regional Commercial. The developer from Vegas (who remains unknown) will then write the check for the balance of whatever the cost is after the city applies the entire sales amount of their land to the interchange. It is estimated to be 21 million. The developer is willing to incur this cost. The city just wants to have the sales tax base from any commercial malls, or eating establishments.

Interstate 11, and How it Effects Kingman

I have had a lot of people call me and ask about the new Interstate 11. More than two years ago, Arizona and Nevada set out on a study to determine the possibilities and benefits of developing a new interstate corridor to connect Phoenix and Las Vegas, while extending south to Mexico and north through Nevada, potentially reaching as far as Canada.
The goal of the study was not just to find a way to directly connect these two major metropolitan areas by building a new highway, but to develop a plan and the necessary infrastructure to position the two states for broader success in the global marketplace.
The Interstate 11 and Intermountain West Corridor Study is now complete and points to the need for a new multimodal freight corridor and a manufacturing belt that will drive trade, commerce, job growth and economic development for the two states and facilitate strong connections to other major regional markets. The State Transportation Board has reviewed and accepted the recommendations documented in the Corridor Concept Report, the final element in this initial two-year feasibility study. This report, along with all the study’s documents and information, can be found at i11study.com.

The recommended I-11 corridor would likely follow US 93 from Las Vegas, and bypass Boulder City with the new freeway being built that is proposed to be finished by 2018 to the Hoover Dam Bypass Bridge. It would then travel along the existing Highway 93 through White Hills, Dolan Springs and then into Kingman. From here is where it gets tricky. Right now when you come into Kingman you hit a bottleneck when 93 comes into town and reaches I-40. The "gasoline alley" of town sometimes backs up for miles over Coyote pass with traffic trying to get onto I-40 which is controlled by two traffic lights. ADOT has looked at 4 different plans to see how to alleviate traffic here with some sort of bypass. One would go through a series of homes, the other planned routes could damage natural desert, breathtaking scenery of tufa stone cliffs or destroy the very history of town, where Kingman started at Camp Beale Springs. Once this is figured out the freeway will continue along the existing I-40 and Highway 93 south to Wickenburg, running west of the Phoenix metropolitan area, and then generally following I-10 and I-19 through southern Arizona to the Mexican border. I-11 is envisioned as a continuous high-capacity trade corridor extending from Nogales to Las Vegas and potentially north toward Canada that will support a high proportion of large-scale manufacturing operations located throughout the corridor with a major focus on reliable movement of freight traffic. As a multimodal corridor, it also has the potential to include freight and passenger rail, energy transmission and other high-tech facilities.

There is currently no schedule or funding to build Interstate 11. The next phase of the study process — the environmental impact statement — is also not funded.
For more information about the Interstate 11 study, visit i11study.com. Posted by Unknown No comments: